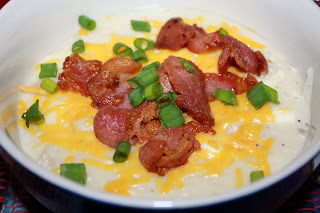 I have seen this floating around Pinterest and thought I would give it a try! It is amazing!

Cube potatoes and put in the crock pot with chicken stock, onion and garlic.

Cook on high for 6 hours or low for 10 hours

Garnish with cheddar cheese, green onions and bacon. Salt and pepper to taste.

(Don't freak out in the initial 6 hours, it smells REALLY garlic-y. I thought for sure it was ruined and was already thinking I would try it without soon, but once it is pureed and the cream cheese is added, it is not so harsh)
Posted by Sheri at 7:27 PM 2 comments:

We are having a rough go of it right now. Dustin typically has a difficult . . . DIFFICULT . . . D I F F I C U L T . . . time in October. This year will apparently be no exception. He has been pretty decent in recent weeks. He has not ran out of the house since just before school started, he has been sleeping well, and he has been quite helpful. The biggest issue we have been dealing with is a very smart mouth and a difficult attitude. I think that someone at school has been serving as a negative role model, the way he has been lipping off at home is new. His attitude is very "teenagery" yet he is still acting like a 6 year old much of the time.

The thing that I cannot stand the most is that when he hears the word no he melts into craziness. If he does not get his way, the crying, the whining and the jumping commences. It is almost always followed by some attachment junk that spews out of his mouth . . .

It bothers me that after 9 years and countless stuff we have dealt with, he still thinks that leaving the family is an option. It breaks me heart that this is even a viable option in his mind. It hurts that he is that "broken" that he even thinks that it is possible.

Agh! It makes me nutty. It kills me that we do this nearly every day. He truly thinks that you can simply throw someone out. He feels disposable. It also makes me crazy that he would rather live in a box on the street or ask to go to the psych hospital than live in my house. I know that neurotypical teens want to leave etc, but the difference for me is that he truly believes that it is possible for a mother or father to just be done and toss him out like trash.

Sometimes I believe it is for reassurance. Sometimes I think he just needs to hear that we will not do that to him. I think it is a dance that he feels is necessary to feel attached to us and know that we care. Other times, like tonight, he really thinks he would be better off without us.

If I wanted to be all selfish about it, I would be truly frustrated that he feels this way even after we have sacrificed so much of ourselves to give him the home he has. I would feel like it is a slap in the face that he had no one else who wanted him and we were willing to take on all these issues because we loved him and now he doesn't even want to be here. Of course, I know that he is not doing this to torture me, he is in more internal turmoil than I can ever imagine.

But sometimes, not feeling that way is hard.
Posted by Sheri at 5:12 PM 4 comments:

Button art is all over the place. I love buttons. This one struck my fancy so I made one for my daughter's bedroom wall. Good stuff. The canvas is 8x10 and a two pack at the Mart of Walls costs less than $6. 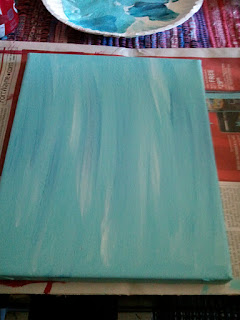 I painteda small canvas with turquoise and a bit of white and navy thrown in to create some depth in the color. I let that dry for a few minutes while watching a movie. 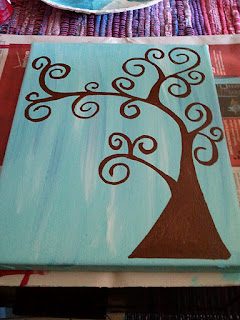 Then I took a paint pen and drew a tree with some swirly branches and let that drip for a bit longer. 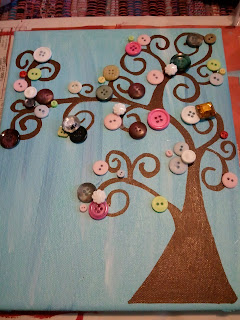 Lastly I took the glue gun and glues on some fun buttons. Voila! Cheap, easy, fun artwork!
(I was too lazy to get up and get my camera, so phone photos will have to suffice!)
Posted by Sheri at 2:35 PM 4 comments:

We are home. Dustin is a pooping machine. Just a brief update while I get my world back together over here:)
Posted by Sheri at 8:54 AM 3 comments:

So, my son is still in the hospital in Wisconsin and I am home. I left him and my husband there and I came home to get supplies and bring the littles home for school. My mother is graciously watching them for me until this is resolved. I will be returning north at some point to retrieve husband and son or to sit with them if surgery is necessary. Right now, we are still about 50/50 chance that surgery will be a necessity. Prayers still welcome. Thanks for all your good thoughts!
Posted by Sheri at 7:49 PM 2 comments:

So I am in Wisconsin visiting a dear friend. Dustin began vomiting on the way here, just past Chicago. He was quite ill all the rest of the way here. It was quite a traumatic trip. By the time we got here last night he was acting fairly normal. He had stopped vomiting and I thought that perhaps we had turned the corner and it was just some motion sickness. This morning he had a small episode.

We traveled to a very large farmer's market and enjoyed downtown Madison. Within a couple hours it was obvious that he was not doing well. After more vomiting started I called the pediatrician at home and she directed us to the ER if it did not get better. About an hour later we were at a satellite hospital and having a CT scan done with contrast. things started moving quickly when they came in and said he had a high grade bowel obstruction meaning NOTHING was moving through his system. They transported him to the main hospital by ambulance and admitted him. He is laying downtown at a hospital in Madison with the hubby sleeping in the bed next to him.

Tomorrow I plan on taking my two littles home and sleeping at home. I need to collect some medication, hug my dogs, get some clean underwear and head back up here. My babies will stay with grandma so they can get to school.

One of two things will happen with Dustin. He will either start moving things through his system with the help of his IV fluids and his NG tube emptying his belly, or he will need surgery. Surgery will mean quite a stay and I hope we can avoid that. They said we will likely know what way we are headed in 48 hours. Prayers would be appreciated.
Posted by Sheri at 8:55 PM 8 comments: