Not many people understand what it means to have a child who exhibits constant chatter.  I know that most people think about that annoying kid in school who would not shut up or the lady next door who has no idea when enough is enough and you just want to finish your latte in peace. No, it is much more sinister than that (*wink*).  It is horrific and make you want to poke your ears out with a red hot stick.

Let me explain.  And please, try not to poke your ears out.  I promise I will go easy on you.

I decided driving home tonight that I was going to keep a mental tally of the number of times Dustin says the same thing over and over.  You see, we have patterns.  There are a number of things he repeats, or harps on, constantly, but there is a pattern to the maddness.  I decided to focus on the Big Three.

You see, from the moment I walk in the door until dinner I get to hear something about going outside.  He is on constant supervision so he cannot go outside without an adult.  Tonight I got home just before 5:00 and we ate dinner just after 6:30.  During that hour and a half I hear one of the following phrases, or something very similar 57 (Fifty Seven!!) times.

YOu may be thinking, "For the love of all that is holy, take the kid outside!"  Well let me tell you this, 3 of those times we were ACTUALLY outside!!! We were outside and he is so consumed with asking me if we can go outside that he forgot we were outside.  Serious. This is my life.

When dinner is served we usually switch gears.  Something clicks in his head and he knows that the outside time is lost for the day.  Then we begin switching to food.  The second he is done eating he starts asking for a snack.  This lasts about an hour and a half as well.  Tonight, the count was up to 62.  (Sixty Two!!!)

You might be thinking, "Give the poor kid his snack!!"  Well, you see it is not that simple.  If you give it too early he just asks for more and the cycle continues.  Oy!  You also must understand that mixed in with the "Snack talk" is also the "I really need something to drink" talk.   And as you could probably guess, included is "Mom, I need a drink so bad I might die."  Yep, he is nothing if not consistent.

Snack time is over.  You know what is next?  Take a guess.  I bet you can figure it out.  You got it! From snack time we deal with "When can I go to bed."  Tonight we are up to 27.  This will include classics such as:

You are likely thinking "Send the kid to bed!  Get him out of your hair!"  Nope.  Not a chance.  If he goes to bed before 10:30 at the earliest he is up before 5:00am.  He is absolutely unable to stay in his room AT ALL in the morning.  As tenacious and he is about his talking, the coming out of his room is even better (insert sarcasm).  His door is alarmed so we know when he is out of his room, and that sucker can go off up to 15 times a morning.  Swear to goodness.

Of course I would be neglectful to mention that the Big Three are not alone in their misery.  Tonight our recurring theme was "My allergies are bad!".  If I heard one more time that his allergies are making his "stuffy"  I might have had to hurt myself.

Just for giggles, let me tell you about this past weekend's theme.  We have a local festival called the Johnny Appleseed Festival.  Dustin began asking when we were going as early as Thursday.  From the beginning, we told him we were not going until Sunday afternoon.  I endured 8 million (may be exxaggerated) questions about when we were going to "Johnny See Apple-sode".  My facebook status on Saturday was "If Dustin asks me one more time when we are going to Johnny See Apple-sode I am gonna punch him in the apples!" 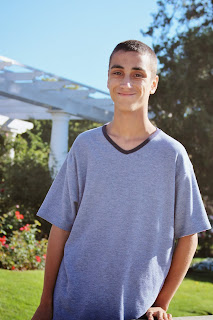 It's a good thing he is cute!