Claudia wrote a beautiful post yesterday. Go on over and read it . . . trust me you won't be sorry. But if indeed you don't go over, I'm gonna share the best with you so that I can save it for myself also. I think this is something I need to read all. the. time.

She was talking about how one of her sons remembers when they used a door alarm on his door in order to know when he was coming and going. He had to use the bathroom several times a night and instead of having the alarm go on all night, they put a bucket in his room so he could use it and dump it in the morning. This was a very short lived solution to a long term problem and they soon stopped using it to deter the behavior.

He remembers this as a LONG term issue in her home and throws it at her. In her words, "Mike recalls this that he lived like this for his entire childhood -- locked in his room with a bucket to pee in. In reality, we tried it for about a month and realized it doesn't work, but with his mind working the way it does it is where he gets stuck. Obviously, we haven't tried it again and we wouldn't do it again. It wasn't the way he made it sound, but it probably wasn't a good choice either."

Her next sentence hit me in the gut. "For the rest of our lives he will bring this up -- as a definition of his childhood." This is so true of Dustin and how he perceives things also. Perhaps this similarity is due to their FAS diagnosis and the inability to connect cause and effect. Perhaps it is just the way their brain works. Dustin is a very concrete, black or white thinker. When it comes to what happened in the past it is all or nothing. I don't think Mike is exaggerating the situation to make himself feel better or simply to torment Claudia, but that is how he truly sees it. Dustin is the same way!

She goes on to say, "I guess my reminder to you is this: Ask yourself when you are parenting your kids if ten years from now you want to be reminded of what you are doing today. Look at it from the memory picture of a child -- when they look back -- if they only remember bad things -- what are they going to remember?"

Whoa. That is heavy.

"But the next time you come down really hard on your kid -- you may want to ask yourself if you want that defining their childhood. And then love the heck out of that kid. I confess openly that Mike spent a great deal more time in Bart's lap than he did mine because I could not make myself connect very well with a child who was being so rude and defiant to me all the time. And that was my bad.

I'm not saying that a child who has many great memories and spends time on your lap is going to necessarily turn out any differently than a child who is "locked up for their entire childhood." But my guess is that you will turn out differently after choosing the lease controlling option of the two."

This is so very true. I have been reading Claudia's blog for years and over the years I have realized our approach to things our kids do is very similar. I love her honesty. When she is wrong and got sucked into a power struggle she admits it. She wants other to learn from her mistakes. She loves those kids with her whole being. She has a difficult time with her controlling nature. I do too. Thanks Claudia for sharing!! I needed to hear this today.
Posted by Sheri at 7:05 PM 2 comments:

Friday I was on a daycare field trip at a place called Bounce Mania. It is full of those inflatable bounce houses. There was one that was an obstacle course. I had been going through them all week. I fell off a rung of the ladder going to the top of the slide which was about 5-6 feet in the air. I fell backwards onto a landing area feet first. Let's just say that the sound I heard I hope to never hear again. I knew immediately my leg was broken.

I was transported to the hospital in an EMS and was taken to Xray. My ankle was dislocated and I had an obvious fracture, but thankfully it was closed. The gave me some good meds and realigned it. More xrays showed that the main ligament was involved and surgery was necessary. I went home for surgery the next morning.

Saturday I had surgery to reattach the ligment so it would heal. I have what is called a maisonneuve fracture, meaning I have a fracture of the medial malleolus of the ankle and the fibula, just below the knee. Ugh! I have to be flat on my back for 2 weeks and then no weight bearing for another 6 weeks. The pins and plates will come out at about 6 months.

Right now, I am not even watching television. Anyone who knows me knows that is huge! I cannot focus on anything due to the pain, so likely the blog will be quiet for a while. If you are the praying kind, please send prayers, the kids are all wonky knowing that I am laid up and I cannot hardly take the drama right now!
Posted by Sheri at 9:38 AM 15 comments:

This week was insane.

I had photos to edit from a family shoot, the 4th of July holiday, painting, repairs and new carpet for my duplex to get ready for our new renter, 7 field trips at work this week, a photo shoot with my parents and their grandkids, a wedding rehearsal (out of town) and the wedding for which I was the photographer, then today I painted my parents duplex for their new renter and mowed my lawn! 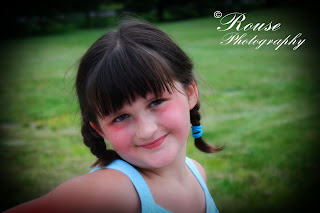