The remainder of our Florida vacation was awesome. Thekids settled into the routine of laziness and the beach and we had a swell time. My mom and step-dad did not have a relaxing time I'm afraid. We ran them ragged, but I think they enjoyed their time with us. Robert has made a video from the short clips we made on our camera. I have also posted the video of Harrison swimming across the pool. 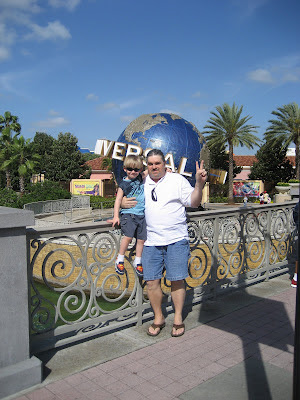 Okay, maybe not. We don't care for Disney. Our family's Orlando park of choice is Universal Studios. It's clean, entertaining and I don't have to hear "It's a Small World" 6,500 times. I know, I know, there are tons of Disney fans out there, but I'm not one of them.

Dustin has been to Universal before, but the "littles" had not, neither had my mom or step-dad. We spent 2 days there and had a super time. The first day was a little rocky as Dustin became acclimated to the environment. All in all he was pretty well behaved. He hurt his foot the day before on the beach and the first day at Universal did him in. When we went back today, we rented a wheel chair for him and it was FABULOUS. He kept his hands of the other 2 kids and we didn't have to chase him down or listen to him whine about how tired he was. A bonus was that people looked at him differently when he threw fits. I have remarked about how his disability is "hidden" before many times. He was looked at by others with patience today and irritation yesterday just because he "looked" handicapped in the wheelchair today. We also rented a double kid-buggy today for the littles . . . insert no-whining sentence here as well. Those choices also helped us move faster since we didn't have to rely on slow, little legs.

The best thing we spent our money on today was the "Express Pass". This wonderful little card allowed us to bypass the lines and speed right to the front. I knew they had them, but didn't want to spend the money on them before. HOLY CRAP. These little gems are well worth the money when you have pre-schoolers and a FAS child who cannot be patient for anything! I would've gladly given my left arm for this privilege after the long lines yesterday, thankfully a large sum of money was all they required. 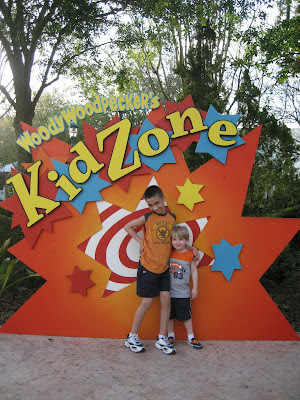 My mother referred to the "Woody Woodpecker Kid Zone" as "Pecker Land" and I nearly pee'd my pants each and every time she said it. My son used to call the woodpecker that lives near her house a "pecker" when he was little. We used to get a kick out of him saying "Shhh, Nanny I hear a pecker"

As Dustin as I were ascending the "mountain" for the Dueling Dragon's ride he asked if it was coaster. I said yes to which he remarked, "Ha-Ha, you have to sit in a fat seat!" You see each coaster that has a pull-down bar had what they call "Modified Seating for guests with certain upper-body dimensions" I called them big-mama seats. Dustin cut to the chase and simply called them "fat seats". The funny part is, that when we got up to the ride, Dustin jumped in a seat and pulled the bar down and his scrawny little butt was in the "fat seat" since it was already locked, I had to squish into a regular one. Ha Ha.

Run on over to our family website to see some more pictures of our darling kids! 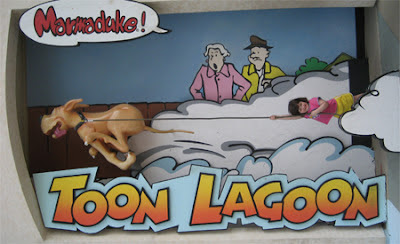 What a couple days! We set off Monday afternoon for the airport. I was a little apprehensive since all three of my children have never flown. I wasn't sure how they would handle the take-off and the flight itself. I myself don't handle the final approach. They did great. I will post a video of Dustin just prior to the initial taxiing. I was quite worried about his behavior after he was this wired at the start, but he was great on the plane. Harrison and McCartney were blissfully unaware that we could plummet to our death at any moment and they were super. 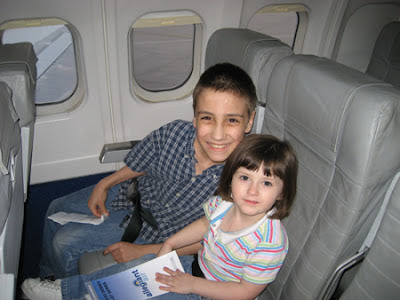 This picture of McCartney shows her in the first of 5 seats she occupied during the flight. That is, if you don't count the 3 trips to 2 separate bathrooms during the hour and 57 minute flight. Harrison looks so little in the seat and I stuck Dustin near the window. God was with us and not only did we not spiral toward earth, but no one sat in the seats in front of us or behind us. Dustin was unable to annoy all our fellow passengers as we were on the wing so the noise pretty much drowned him out.

Harrison stepped off the plane to see my mother and step dad waiting for us. The first thing he says is "Nanny, where is the beach?" He had this impression that Florida is one HUGE beach. He was disappointed that by this time it was after 10 pm and the beach had to wait until the morning. They were so over-tired by the time I got the car and got to the hotel hat bedtime was awful! 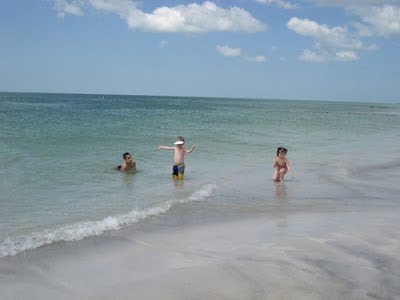 This morning we headed over to "Nanny's Condor". as Dustin calls it. Harrison remarked that all the houses "stuck" to Nanny's were all the same color. My mom owns a condo in between the gulf and the inter-coastal. We had Nanny's famous waffles for breakfast and set off across the street for the beach. McCartney stepped of the ramp and onto Madeira Beach in awe. My mom asked her if she liked the beach and she said, "Yep, it looks like pepper" I love the way kids see things! I was pleasantly surprised that Harrison and McCartney were very brave and hit the water's edge like true champs. They didn't have much fear. Dustin was much better than expected since the last time we were in Florida before he "littles" were born, he was terrified of sharks getting him in the water We practically had to drag him to the shoreline. Today he had to be called in constantly because he was scaring Robert with how fearless he was. THey played for hours in the very cold water with little to no problems and "dug" the sand . . . no pun intended. What a nice day! 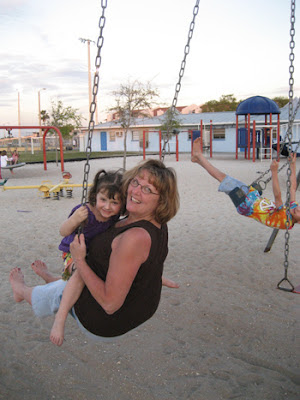 Tonight we headed to the inter-coastal waterway to see the boats and over to the Condo's pier. Robert had a close encounter with a pelican who thought he might have some dinner. The park across the street is awesome and the kids had a blast way past dark.

Case Conference was interesting. We did accept a modified schedule which means Dustin will only attend school for 2 hours daily and he will be receiving his very own 1:1 assistant. They will provide transportation and the modification has to be revisited in 20 days to see how effective it has been. We did get all of our concerns on the table and I think we were heard. They may not have agreed, but they listened. I did have some issue with the ways that Dustin's "aggression" was characterized. Dustin does bite, kick and hit. These are not anger based, they are simply a lashing out due to his low frustration tolerance. I also see them as being a product of the environment at school and that they "work" for him there. They achieve his goal which is always attention and 1:1 working environment.

I was dead-set against modifying his day before walking into the conference, but I listened to the reasons and the stories of success that they have seen due to modifying a student's day. We decided to give it a chance. Something has to stop this down-ward spiral that he is in. We have to break the cycle of "crappy" days and give him some success. I have seen his self-esteem plummet in the last month and it upsets me.

We also agreed to keep him out of school for the next 3 weeks. One One and half weeks will be due to our family vacation and the following full week is Spring Break. We thought that 3 days in the middle would be completely non-productive.

I think the school system saw our desire to work with them to create a suitable environment for learning for Dustin. I think the administration saw that we are behind them 100% and respect the chances they have given Dustin. I hope that they saw our love for Dustin and our determination that he become a functional member of society along with positive assistance at school and home. And I did see the Special Education department's drive to provide a positive and successful placement for Dustin. The resource administrator from the department is determined that Dustin will have this one more chance to succeed in this program. She is even going to come and give the new assistant guidance and training on how this needs to be done to make it work for Dustin. I can't ask for much more than that.
Posted by Sheri at 1:13 PM 2 comments:

We have a case conference Thursday. The phrase that strikes fear in the hearts of parents of any FASD child. The school is not happy with Dustin's behavior. We cannot change his behavior while he is there. I have went to school and Robert has went to school to shadow Dustin and when we are there his is fine. We are his external brain . . . we are his control mechanism. He lacks one for himself. The school hasn't developed that skill yet. They are overworked and under staffed. He needs his own 1:1 aide. I don't feel as though that will happen easily if at all. I am not up for a fight. It sucks to have to fight for my child's education.

I am one who always looks for and waits for the worst in every situation. Thursday may be fine, but it may be ugly. I look for the ugly. I pray for the fine. The problem is the aggression that he is showing at school. It isn';t truly aggression, it's poor impulse control and it's poor judgement. He attempts to hurt someone because he thinks it will intimidate them. Last week for instance he took a teacher's hand and squeezed it. The teacher has a wrist injury and as a brace on that arm. He looked at her as though he will twist her arm, he did not. He wanted to see if that would "scare" her away from disciplining him. This was relayed to me by the teacher. By the time the office got the information, he had "twisted the teachers arm and tried to hurt her"

I have no more answers for them. I am all out of suggestions. The law says that the school district must provide my child with a free and appropriate educational placement. If this one isn't working, find one that does. If one doesn't exist you have to make one. I don't know, I am scared. I think they will try to remove him from school. That is a bad thing.

I am reminded of my favorite line from Lloyd Dobler in the movie Say Anything. "I don't know, but I know that I don't know".
Posted by Sheri at 10:44 AM No comments: