I spoke to my older son's teacher today. She asked me if I had taken my son to the doctor recently. I asked why and she said, "I think maybe he has allegies." I explained that he hadn't had that issue before. "Well, we're having a problem with mold here at our school." WHAT?? Then she begins to tell me how all the classrooms are damp and they have dehumidifiers in all the rooms. They have found mold in all the classrooms because of this problem. Do you think that if this happened at home, they would criticize me for having an issue at my home. Absolutely. But, since it's at school they want me to take my son to the doctor to see if he has any allergies. HELLO IT'S MOLD! Of course he is having problems with allergies. Sometimes I wonder what they heck school administration is thinking.

A couple weeks ago my son did not get off the bus at his usual time. My husband began to call the transportation department, which was busy over and over. He finally got through and was put on hold for about 15 minutes. By now it was 45 minutes past the time my son should've been home. I finally got through at the school and found out he was still at school waiting for his bus. School had been dismissed 1 hour and 10 minutes earlier. I told hthem not to put my son on the bus and that I would be right there. At this point I should remind you that my son is special needs. He is moderately handicapped and has huge abandonment issues since he was removed from him mother's care at 4 years old and placed in 10 foster care placements in the ensuing 2 years. THIS is the child they leave at school for over 1 hour. I got to school and he was definately a little upset. Why the school didn't call me is beyond me. But trust me, they will next time since they got an ear-full.

On the way home I decide to vent my frustrations to the transportation department. I waited on hold for a supervisor for over 20 minutes. Once he was on the phone, he said, "This must be about Dustin." I said it was and told them how difficult this would be on him and that I found it inexcusable. He said, "What should I do about it." I asked him to guarantee that it wouldn't happen again and tell me that I could rest assured my son would be home as close to the promised time as possible. He said, "Nope can't do that, this is after all a public school" HUH?? I then asked him if he knew what the school would do if I left my child at school for over 1 hour after dismissal. The school corporation policy is to call Child Protective Services since I have abandoned my child at school. HELLO, you did the same thing and you call it okay.

All I ask is that while I place my child in the care of Fort Wayne Community Schools that you do your best to protect my child from things like incompotent bus drivers and oh, I don't know . . . MOLD!
Posted by Sheri at 1:03 PM No comments: 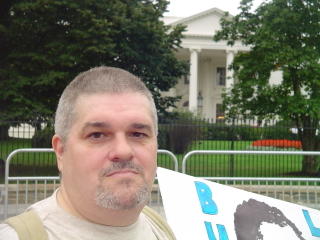 My husband attended the Anti-War rally in Washington this past weekend. I am rarely left alone, my husband and I are together all the time. It haven't spent time without him since before our children were born. I thought I would scared to be at home alone, but I think I am more frightened now . . .

I scoured the news on Saturday only to find scattered news concerning the march. C-Span did have coverage of the speakers prior to the 2 mile march through Washington DC past the White House, however the march was barely mentioned in the media. This irritates me! Hundreds of thousands were present as they marched from the ellipse and past the Whiite House. I think this is definately news-worthy! It scares me that hundreds of thousands of people descending on Washington DC for a peace rally does not make the news.

Mr. Bush was away from the capital as he oversaw hurricane efforts from Colorado (Colorado???) and Mr. Cheney had a scheduled surgery on his knee( on Saturday??). Jessica Lange made a comment about Mr Bush not ever being where he could see the will of the people. Perhaps the most interesting speaker was Ramsey Clark, former Attorney General of the United States. He made a compelling speech for impeachment of President Bush for high crimes and misdemeanors agfainst humanity. Visit www.impeachbush.org for more information.

So much of what was said Saturday scares me.

I am scared that so many people are oblivious to Mr. Bush's alienation of the remainder of the world. There are those that stand behind him on blind faith. They choose to ignore the fact that his policies and his principles are totally against what he claims rto stand for. There are those "christians" ( I hesitate using that word, because I consider myself one) who stand behind him as he lies and has no regard for human life, yet they back him because in their view he has morals. I just simply don't get it! And yet, most of those people would tell you just because you attend church doesn't mean your saved, it's your actions that count. Well, Mr. Bush's actions certainly count in the eyes of Cindy Sheehan and other mothers who have lost their sons and daughters in Iraq, for a war that was not warranted and not our business!

I'm scared that even my mother is blind to Mr. Bush and his phony war. This is a woman who I consider my role model and my best friend. She is the best grandmother my children could want, and yet she can't see past her republican views and see Bush for what he has done to make our country hated in the eyes of the world.

I am scared that my children will grow up in a world where America doesn't stand for justice but vengence. That our war will Iraq will continue to spend dollars that would help further justice in our own country. Money that would feed and clothe those living in our democracy. I pray that we would be more concerned with helping those in our own country with needs as we are with furthering democracy in a country that on a whole doesn't want it. What about our people who are left behind? What about our children who need educations so that maybe they will choose more wiasely than we have?

I am scared that our current two-party system will continue to tear at the fiber of our country and not meet the needs of everyone in the center. That we will have to choose the lesser of the two evils when voting.

We need a centrist candidate that will UNITE our country instead of UNTIE it.

Visit my husband's blog at leftofcentrist.blogspot.com for more info and pictures of the march.
Posted by Sheri at 12:19 PM 2 comments:

My husband is really good at being right. I hate to say that in print, but it's true! Robert is a true trivia buff and he reads everything he can get his hands on about entertainment. He likes to be informed. When we first met, I called him "Mr. know-it-most". Here is one of my biggest pet peeves about my husband . . .

He will start harping on me about watching a particular show. Usually it's some obscure series pilot or some backpage cult phenonenom that "normal" network-type people haven't given a chance. Usually one of two things happen: there is some outcry from fans when the show is slated for cancellation that tends to get more people interested, or it gets cancelled and becomes more popular on DVD with rabid fans. Anyway . . . he'll start nagging me to watch something I have no desire to see. He'll DVR and store several episodes until I finally break down and watch one just to get him off my back. this is usually done with a grumpy attitude and a "fine, I'll watch it but you can't make me like it" comment. Here's an outline of what typically happens . . . within my own mind

This has happened with Buffy, Dead Like Me, the original season of 24, Veronica Mars, Wings of Prey, and now most recently Firefly.

Firefly is fabulous. It is interesting and witty and has great humor. Joss Whedon is a master of the odd cut aways to commercial and that wonderful Xander-esque dry humor that makes you spit out your soda. I LOVE it. If you get a chance, catch this wonderful "cult-classic" on DVD, the entire series is under $30, before the motion picture Serenity comes to theatres.
Posted by Sheri at 10:43 AM 1 comment:

Today, my son did not have any potty accidents at school. Do you know how BIG that is? If you are a parent of a preschooler, you do. If not, you think I'm crazy!

I was thinking today about how very in control and organized I used to be. I am no longer that being. I suppose that all starts when you have three little lives to worry about in addition to your own. I'm more concerned about getting out of the house without the dog on my heels, with a pacifier, with nap stuff for school, without a meltdown about the spiderman toy my son wanted to take, with shoes all tied AND getting to the van on our very busy street without having a child squished like a pancake then I am about putting on makeup and looking my best.

I am constantly forgetting to bring this, or take that to work. I always forget party day at school not to mention show n tell. I always say "I'm the worst mother, I forget an item that start's with B, sorry" I'm lucky if I can get my bra on straight while rushing the dog down that stairs to go outside before he pees on the floor while my daughter is chasing behind me shouting for chock-it milk.

Anyway . . . You know it's a good day when . . . you have three little lives to look out for and love and hug and kiss and you realize that they are WAY more important than make-up, taking your special coffee mug to work, and being the organized operson you once were.

I love my babies!
Posted by Sheri at 2:31 PM No comments: