I have decided to take my son out of school at the end of this year.  For years I was intent on the fact that he would be in school as long as they allowed.  Since he is in the moderately handicapped program with Functional Behavior curriculum, he can attend until he is 22 years old.   When he transitioned this year from the local high school program to the Adult Transitions Program I had high hopes that this program would be beneficial for him and meet his needs.

Boy, was I wrong.

My son has had a 1:1 paraprofessional since the end of 7th grade.  While she has been helpful at providing that external control that his brain is lacking due to his Fetal Alcohol Syndrome, she has not done good things as far as his attachment resistance.  Not fully understanding the boundaries we needed to keep in order for him to continue with healthy attachment with us, she really did clog up the works.  I gently nudged and offered suggestions.  When things were blatantly I problem I corrected them, but things were never perfect.  Not wanting to upset the apple cart, I didn't want to cause a stink and ask for a different staff member.  I figured the flawed one that worked well with him was the lesser evil than one that could be worse.

This year, for several reasons, that came crashing down.

Boundaries have been crossed.

I think that part of the problem is that the program itself is meant to make these students more independent and more self sufficient.  My son needs CONSTANT supervision.  While he is able to accomplish some independent tasks, he still needs supervision.  Daily reminders like "You are an adult now ...." and "When you are living alone ....." have served to amp up his already anxious and defiant behavior.  What he is being told at school and his reality are causing him confusion and anger.   No matter how many times I have this discussion with those in charge, things are not changing.   It is frustrating.

It is equally frustrating for them I am sure.  He displays a completely different set of behaviors at school and on his job site than he does at home.  He is able to function semi independently, but once again he is continually supervised.  The minute he knows he is not being watched, he makes foolish choices dues to the dangerous cocktail of lack of object permanence, impulse control and just plain trauma.   There he is the center of attention and doesn't have to compete with others.   They have no concept of the child who is typically the one we see at home and unfortunately I don't think they believe what I tell them.

They don't believe what I tell them.

Let's let that sink in a bit.   I am well aware that no one can truly understand this life unless you live it, even those who are tasked to deal with our children at school for many hours a day.  But PLEASE for the love of all that is holy, listen to what a parent says to you and don't question it when they say it is HARD.  You are simply adding to the load when you give me that look of disbelief.  I am not exaggerating he really did eat 14 bananas in one sitting and all the peels ARE behind his dresser at home I promise!!  I do find blocks of cheese hidden in his pants to take upstairs later and he truly did try to put the cat in the backpack to play with him later.    Why would I make that up!?  I don't find it humorous, I am certainly not bragging.  I would absolutely choose BORING over my life any day!

So today when I had a small discussion about pulling my child from school to put him in a day program that "gets" him and works with the parents as a TEAM and will strengthen our rules and expectations at home the teacher was not altogether positive.  I was chastised a bit for not meeting with Voc-Rehab about finding him a job.  A job is simply not in his future.  Perhaps the workshop at the day program will be a good fit for him to make some money in the future, but a job working in the "real world" even with job coaching will not ever work unless he has 24/7 supervision and that is not available.  When the teacher mentioned accessing his own transportation independently I laughed.  It was not kind, but I said "You really have no idea what my child is really like.  You are completely clueless." And the conversation was over.  How can you support parents when you refuse to see the forest directly in front of you.  If you are focusing on the cute little sapling and not seeing the giant redwoods in the near vicinity you are worthless in my world and my child's.  We have larger issues at hand.

Thankfully we have a wonderful team behind us.  His day program has his number and he does well there.  His behavioral consultant is a gem and understands him well.  Our case manager is responsive and kind.  I think we are on a good path.  School is about to become a thing of the past!

The day the interwebs restored my hope in humanity . . .

Saturday night we had a bit of a fire at our house.  Our coffee table caught on fire from a candle.  It was caught in time and we got very lucky.  When my husband came downstairs the flames were about 4 foot high.  The couch & the rug were scorched and all the stuff on the table was ruined.  That included my beloved camera and a brand new lens.  I was not home and when my husband  called me to break the news I was of course very relieved everyone was safe but so very sad about my camera.

Then the panic set in.  That  camera is slowly becoming a new source of income for us. I recently participated in a wedding fair and I have MANY weddings booked this season as well as my typical sessions with families and children.  I also recently became involved with National Rock Review and I am shooting shows for them as well.  I NEED my camera!

We do, of course, have homeowners insurance but there is a hefty deductible.  With my husband's illness, it would be a hardship to come up with $1000 for the deductible but was totally necessary considering the situation.  Had it been anything but the camera we would've likely done without.  I would happily sit on the floor or in lawn chairs, but I needed that dang camera! I spent most of Sunday in tears. The camera was sitting on the dining room table and every time I would walk by it I would start again.  It was just so terribly sad to see it there all melty and burnt. 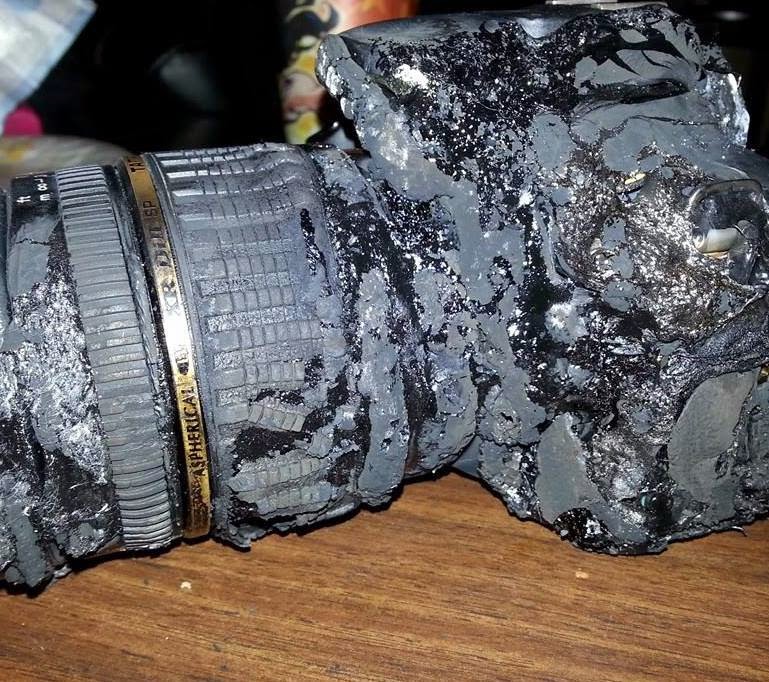 One of my dear momma's from BeTA - Beyond Trauma and Attachment took it upon herself to set up a "Go Fund Me" account for me to try to help come up with the deductible.  It was late Sunday night when it went up and by the morning we were already at 20%.   Then miracles began to happen!

To be completely honest I was a bit overwhelmed that people were giving me money.  I felt a HUGE sense of thankfulness, but also a bit of shame that I would be in this position.  I had several friends throughout the day encourage me that they wanted to help and that I should not feel that way at all.   I was told over and over that  I had given so much to others and that I should sit back and accept this.  I began getting notifications on Facebook that we were climbing to 40%, then 50% then more.   By 2:00pm Monday were we fully funded and money was still coming in.  The link to the Go Fund Me had been shared over a hundred times and  people that I did not even know were contributing.  It was AMAZING.

Through out the afternoon I continued to get wonderfully kind messages from friends telling me that they were happy to help and pleased they could contribute.  By the time I went to bed last night it was 140% funded and I had changed my profile picture to that melty camera.  It went from a photo of something that was AWFUL to a photo of HOPE.  It went from a sight that made me cry to a BEACON of all that is GOOD in my world.  I no longer see it is UGLY.  I have an amazing support system and I am reminded that given the chance people are GOOD. My loved ones and STRANGERS did something together that affected me so profoundly I will not be the same.

I could never express my gratitude.

I will pay this forward when I am able.

I will forever be touched by the kindness shown to me and my family.

I have decided that this fire will be the turning point in my year.   I will not let the ugliness of "what if" affect me but revel in the fact that things were not so much worse.  I will see this as a CLEANSING fire and I will rise from it stronger, more determined and much more able to feel loved.  I am not alone.